If the wind is passing equally over each side of the sail and no lift is being generated the sail is said to be LUFFING. If forward motion is stopped and the sails continue to luff the vessel is in IRONS. 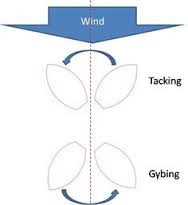 The second method of changing the vessel’s relationship to the wind is by passing the stem of the vessel through the eye of the wind. This method is called gibing.

When tacking or gibing there are a series of commands that will be given to assure that the maneuver is completed safely and efficiently.

Gybing
Because a gybe occurs when the wind is aft of the vessel and the boom is usually extended quite far out, more care and preparation is required to safely complete this maneuver. When the helmsman chooses to gybe the command, “PREP ARE TO GYBE” will be given. As the vessel is sailing at a wide angle to the wind the sails will need to be sheeted in. This will give more control and prevent the boom from swinging wildly across when the gybe is in progress. It is important that crewmembers keep clear of the blocks and lines when performing this maneuver. When the crew and helmsman are ready the command “Gybe Ho” will be given. As the stem of the vessel passes through the eye of the wind the sails will shift across the vessel. It is most important to haul in the mainsail as the vessel approaches directly down wind and ease the sail as the Stem passes through the eye of the wind. Once on the new course sheets can be adjusted for the proper sail trim. A successful gybe demands alertness and crew coordination.